Tokyo has edged past Beijing, Paris, Seoul and London to emerge as the top city in the revenue analysis 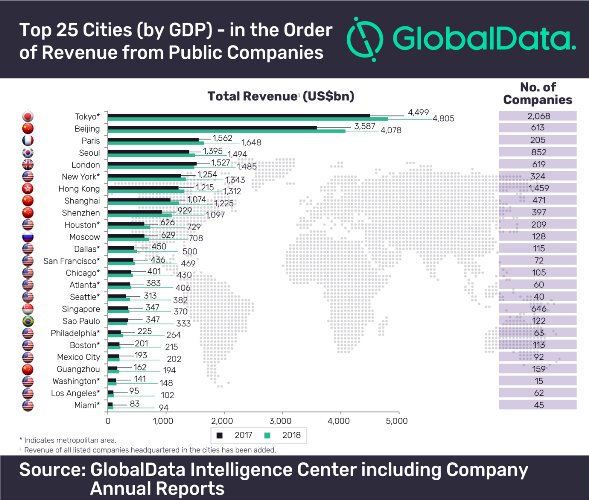 Tokyo has edged past Beijing, Paris, Seoul and London to emerge as the top city in the revenue analysis of top 25 global cities with highest GDP based on total revenue generated by the public companies headquartered in each city in 2018, according to Global Data, a leading data and analytics company.

Mr. Parth Vala, Company Profiles Analyst at Global Data, said, “With 18 out of the top 25 cities, advanced economies continued to dominate the list. They were home to over 7,000 public-listed companies. The remaining seven cities from the emerging and developing countries were headquarters to around 2,000 public-listed companies. Among these, the revenue of companies in Seattle grew by 21.9% on the back of improved performance in retailing, industrial goods and machinery, technology and communication, food services, transport and logistics, and travel and tourism sectors. On the other hand, the combined revenue of companies in London fell by 2.8% due to substantial decline in revenue from insurance, and investment banking & investment services activities.”