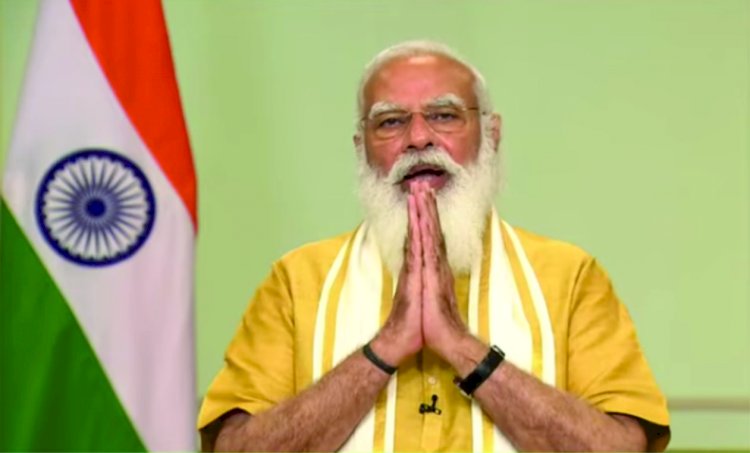 The Prime Minister, Shri Narendra Modi on 12 March addressed the fourth Global Ayurveda Festival. Speaking on the occasion, the Prime Minister noted the growing global interest in Ayurveda and appreciated the efforts of all those working on Ayurveda across the world. He said “Ayurveda could rightly be described as a holistic human science. From the plants to your plate, from matters of physical strength to mental well-being, the impact and influence of Ayurveda and traditional medicine is immense.” 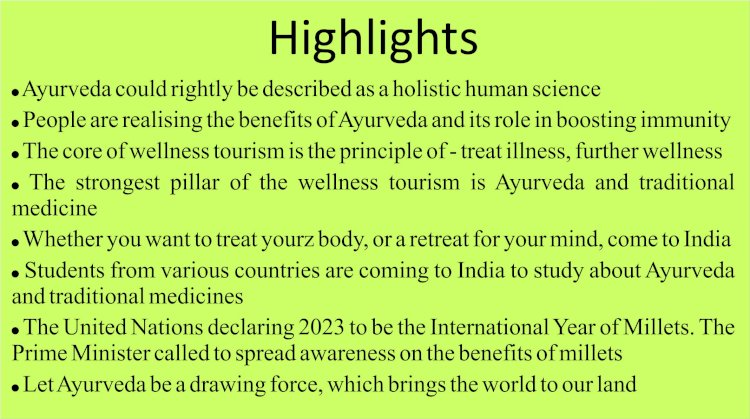 In the context of COVID-19 pandemic, the Prime Minister said that the demand for ayurvedic products is steadily rising. “The current situation presents a right time for Ayurveda and traditional medicines to become even more popular globally. There is growing interest towards them. The world is seeing how modern and traditional medicines both are important to further wellness. People are realising the benefits of Ayurveda and its role in boosting immunity,” said the Prime Minister.
Talking about the potential for wellness tourism in India, he said that at the core of wellness tourism is the principle of - treat illness, further wellness. Therefore, the strongest pillar of the wellness tourism is Ayurveda and traditional medicine. He called upon the audience to tap into the timeless culture of India to de-stress and healing.“Whether you want to treat your body, or a retreat for your mind, come to India”, The Prime Minister invited.
The Prime Minister called for taking advantage of Ayurveda’s popularity and opportunities arising out of combining traditional with the modern. Citing situations like youngsters using a wide range of Ayurveda products and a growing consciousness to integrate Ayurveda with evidence-based medical sciences, Shri Modi called upon the academicians to deepen research on Ayurveda and traditional forms of medicine. He urged vibrant start-up community to specially look at Ayurveda products. He also appreciated the youth for presenting our traditional forms of healing in a language that is globally understood.
On behalf of the Government, the Prime Minister assured full support to the world of Ayurveda. He informed that the National AYUSH Mission has been started to promote AYUSH medical systems through cost effective AYUSH services. It is also working to strengthen educational systems and facilitating the enforcement of quality control of Ayurveda, Siddha Unani & Homoeopathy drugs and ensuring sustainable availability of raw-materials. He informed that the Government is undertaking various quality control measures as well. “Our policy regarding Ayurveda and other Indian systems of medicine is already aligned with the Traditional Medicine Strategy 2014-2023 of World Health Organisation. The WHO has also announced the setting up of the Global Centre for Traditional Medicine in India”, The Prime Minister said.
Noting that students from various countries are coming to India to study about Ayurveda and traditional medicines, The Primez Minister commented that this is the ideal time to think about worldwide wellness. He suggested that perhaps a global Summit could be organised on this theme.
The Prime Minister emphasized the need to promote food items relating to Ayurveda and food items that further good health. He mentioned the United Nations declaring 2023 to be the International Year of Millets. The Prime Minister called to spread awareness on the benefits of millets.
The Prime Minister gave a call to keep building on our achievements in Ayurveda. “Let Ayurveda be a drawing force, which brings the world to our land. May it also create prosperity for our youth” he concluded.

Tag along with your furry friend this weekend for an enjoyable...

Latest research from WTTC shows a 50% increase in jobs...