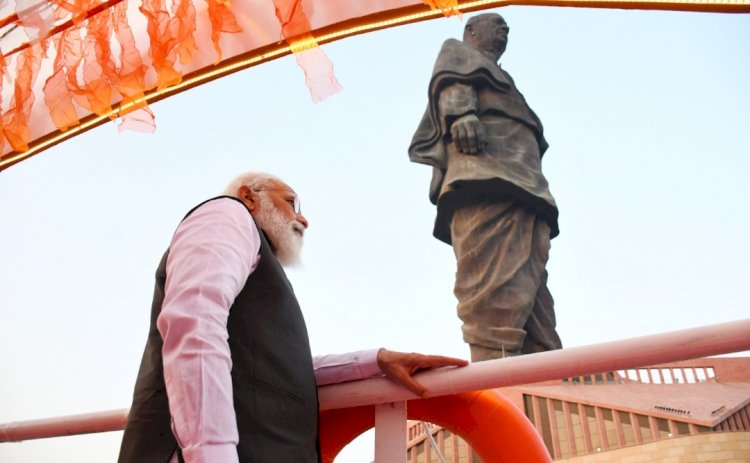 The inauguration of the 17 projects and laying of the foundation stone of four projects around the Statue of Unity has now turned Kevadia into 'Kevadia tourism circuit'.
Prime Minister Narendra Modi, who is on a two-day visit to Kevadia in Narmada district — his first visit to the state since the pandemic struck — inaugurated 17 tourism projects around the Statue of Unity complex and laid foundation stones for four upcoming projects.

Modi, who was accompanied by Chief Minister Vijay Rupani and Governor Acharya Devvrat, rode the train and indulged in games at the Children’s Nutrition Park, cruised in a jetty along the six-kilometre navigation channel downstream Narmada River and petted animals and birds at the Sardar Patel Kevadia Zoological Park — projects that were slated for inauguration on March 26 but were postponed due to the Covid outbreak.

October 31, which is Sardar Patel’s birthday, is being celebrated as Ekta Divas and the projects in the precincts of the statue now called the “Kevadia tourism circuit” have been themed around “unity”.

Modi began his Kevadia visit by inaugurating the Aarogyavan, which has over 1,000 species of medicinal and herbal plantations, including a lotus-shaped indoor plants pavillion, and took a tour of the gardens on a golf cart with a face mask on, except at a couple of “selfie points”, where he stopped to take pictures.
The PM interacted with the women’s self-help groups from 331 families that will run the Aarogya Cafe — a health cafeteria where tourists will be able to purchase herbal items sourced mainly from the rich forests and villages around the Statue of Unity.
Modi, who spent close to an hour at each of the projects, rode the train at the Children’s Nutrition Park, running along a 600-metre track and five themed station stoppages —Phalshaka Griham, Payonagari, Annapoorna, Poshan Puram and Swastha Bharatam, featuring cuisines from across India. Each of the stations has a mascot — Kumar Kisan, a puppet farmer who tells the story of how he grows fruits and vegetables at Phalshakha, an animated cow grazer Janardhan at Payonagri, who explains the importance of milk and a doting mother at Annapoorna station.

Modi also watched a five-minute 5D movie on India’s “unity in food diversity”. He also inaugurated the two-storeyed Ekta Mall, spread over 35,000 sq ft that houses handicrafts and handlooms from across the country.

At the Jungle Safari, touted as the “fastest-built safari in the world”, and the geodesic dome for aviary, “the largest in the world”, Modi spent time petting a macaw and went on the cruise downstream the Narmada river.

Among the projects was the SoU website in UN languages, Glow Garden and the Special Lighting at the Narmada Dam. The Prime Minister also laid the foundation stone for the government quarters and an administrative building coming up in the vicinity following the implementation of the Statue of Unity Area Development and Tourism Governance Authority. The Gujarat assembly, had last year passed a bill to set up a Statue of Unity Tourism Authority which will notify a designated tourism development area around the SoU.

On Saturday, Modi will inaugurate the water aerodrome project connecting Statue of Unity to Sabarmati Riverfront in Ahmedabad by taking the seaplane ride back to Ahmedabad after addressing the trainee officers of Lal Bahadur Shastri Academy of Administration (LBSNAA) from the exhibition hall of the Statue of Unity via live video-conferencing.

Narmada district has been identified by the NITI Aayog as the “aspirational district” with special focus on the indicators monitoring not only the infrastructure or economic returns but also social indicators like health, education, women empowerment, nutrition and local ecology. The Statue of Unity has till date attracted more than 44 lakh tourists, after its launch on October 31, 2018.

As per the NSSO Tourism Survey 2017 report, the average expenditure per tourist for a holiday trip in India is Rs 1,445. At this rate, integrated development of Kevadia is expected to create a direct economic impact of Rs 2,861.68 crore during 2020-2022 and an indirect impact of Rs. 6,127.14 crore considering output multiplier of 2.1411. The study has concluded that “Kevadia Eco-system will generate a cumulative economic impact (direct and indirect combined) of around Rs 9,000 crore (2020-2022),” the report states.

Safe Ride for the passengers of GoaMiles

IT&CM Asia all set up for the Show